My right arm and shoulder are a symphony of pain. It wakes me repeatedly: the burn and sting of the skin on the back of the arm, the gristly grind of the shoulder joint, the stabbing ache where shoulder meets torso.

That arm is covered in tattoos from elbow to shoulder. People ask me what the tattoos mean. They mean: it’s my arm.

Between the waves of pain, when I can sleep, I dream that I am trying to tell a story, or to scream, or to say the name of someone who suddenly isn’t there. If I manage to make a noise at all, it’s only a tiny strangled squeak.

But the other day I managed to say to a small circle of women: this time of year is the anniversary of my running away from home and being sexually assaulted. It was hard to make the words come out of my mouth, especially in a little roomful of people who were trying to Be Here Now. A voice in my head argued that it was 38 years ago. My arm and shoulder say otherwise. I am having a hard time right now. That is the truth.

Here is another truth: “the incident” (as I have taken to calling it) was only a punctuation mark between two crappy sentences. The truth is that I was orphaned, and nobody noticed. I was bullied, and nobody could stop it. I’m not supposed to say those things either, but I’m saying them anyway. This is my story. I can’t let go of it if I don’t own it.

The next day I tell my therapist about telling them. My week has been so full that I feel very far away from her, even though I am somehow managing to sit in the chair instead of behind it. She leans forward and says she’s so proud of me. She says it again, firmly, a shade louder. I feel very far away, but not too far to hear her.

A few years ago, during another round of processing “the incident,” I complained to my husband that it felt like I was trying to pull a fire truck by myself. This is a thing I have actually done: 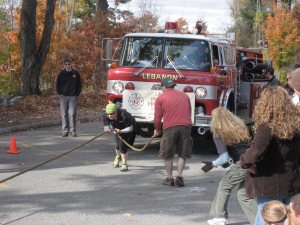 But you don’t really pull a fire truck alone. You can’t. You are the only one pulling, but you are not alone. There is someone sitting in the truck to make sure it doesn’t accidentally run you over. There is someone holding the rope so you don’t trip over it. There are people watching. Most of them are strangers. Some of them are shouting at you. You can’t do it without the shouting.

Julie says: See the body as a beloved animal you are rescuing. Right now, take the steps you know how to take.

You have no choice, she says, but to make your way back into the awkwardness & the pain & the subtlety & darkness & juiciness of the body.

That is exactly what my work is about.

One foot in front of the other. So much darkness. So much juice. Such a long walk.

It’s a good thing I’ve got boots and a flashlight.