I’m almost finished with bad signal. I’ve been rolling the IV stand around the studio and studying her from different angles while I read and practice yoga and goof around. Here’s an angle that I found particularly pleasing this morning:

Sometimes I love looking at her on her own, but all of my newer work is uncomfortable for me to see next to the old work made with Serena (who is a department store mannequin). Even padded, Serena is tiny compared to me. The hardest part of the work, these days, is hanging it up in the front room when it’s finished. 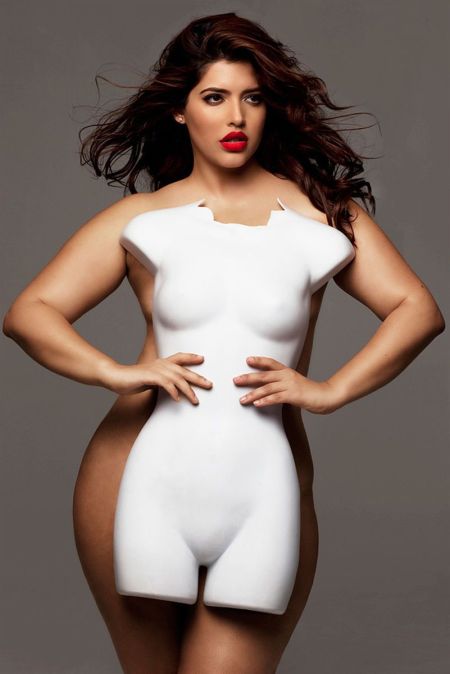 It’s from a photoshoot for Cosmopolitan Latina by Victoria Janashvili. The model’s name is Denise Bidot.

And then Clarissa Pinkola Estes reminded me:

Good enough, then. Thank you, everyone who helps me stay at seventy-five percent.

I’ve been meaning to do this for a while.  Last summer I promised myself that I was going to try to use my words more.  One of the ways I was going to practice that was to photograph things around the studio, and then write about them.  So here goes.

This piece is one of the first things I made after I moved into this studio, almost six years ago.  She is called “dance in the body you have,” and she sits near the door of the studio.

Next to her, on the floor, is the white noise machine I bought to muffle noises from the hallway and my neighbor’s office.  I had my hearing tested eight years ago, just before I had surgery to remove a tumor from my left ear.  They told me I had the hearing of a six-year-old boy.  They tested it again after the surgery.  It remained freakishly good.

The tumor was benign and slow-growing, but would have destroyed my ear if it had been left there.  Or so they told me.  As tumor-having experiences go, it was not too bad.  If you must have a tumor, I recommend a small glomus tympanicum.

After the surgery, I lost 50 pounds.  They had been concerned about my blood pressure during the surgery, and my primary care physician (who is a little high-strung) actually wrung her hands at me and begged me to lose 5 or 10 pounds.  I have mostly kept the 50 pounds off.  My strategy is pretty simple: I eat a lot of vegetables and refuse to buy larger pants.  In your face, Doctor!  I still have to take medication to keep my blood pressure down, though.  I suspect that would be true even if I lost another 50 pounds.

The form I used to make this sculpture was a duct tape dressmaking form, covered in plaster, made from my own body while I was in the middle of losing the 50 pounds.  I had intended to make the sculpture pear-shaped, but she ended up looking more like a butternut squash.  And that’s okay.

She has left the studio twice: for the 2009 Summer Juried Exhibition at the AVA Gallery, and for a 2013 show called Down to the Wire at the Attleboro Arts Museum.

I bought that table at Sclafani’s in Claremont (which, sadly, closed last year), and painted it with BIN primer.  The sculpture went to the AVA Gallery without the table, and I was sorry.  She will never travel without it again.

Here’s a bonus pic of her in Attleboro, with her table, waiting to be installed for the show:

As part of the preparations for the show I was in this spring, I had to measure some of my sculptures. Maybe I should have done it sooner, but it was never a priority for me. I have tended to just say that they’re “life-size,” and people have tended to accept that answer.

I’m not keen on weighing myself either; I let my doctor do it once a year. At my current height, which I’m told is average, I have been both worrisomely thin and clinically obese. Neither of those extremes was particularly comfortable. These days I’m somewhere in the middle, and mostly pretty comfortable there.

People often comment on the sizes and shapes of my sculptures. One early visitor to my studio muttered under her breath about “those perfect little bodies.” The picture at the top of this post is the littlest and most “perfect” of the adult-sized pieces. She was made using a bare department store mannequin as a form. She’s also one who’s the least happy about her size and shape. When I took her down to measure her, I could almost hear her wail of dismay as I recorded that her hips are wider than her shoulders.

She was born from an observation I made to a therapist I was seeing 10 years ago, that I felt like I had a wire cage inside my body. So of course she had to be smaller than me. It wasn’t my original intention to have a conversation with myself about my flirtation with anorexia, but over the years she has come to represent that as well.

They never end up being about only one thing.

As I’ve started to think about representing some of the experiences I’ve had in the last few years, I’ve become less interested in pushing my body towards some unattainable ideal and more interested in how people actually look.  I’m interested in accurately portraying middle-aged sagginess. As it turns out, that’s hard to do with a department store mannequin. It takes a lot of padding and a lot of time. At some point, it becomes faster and easier to make a plaster cast of an actual torso.  So I asked a friend to help me make a cast of myself, which I  plan to use as a form for the next few sculptures I want to make.

Here’s a peek at my first attempt:

This is one of the ways that a healthy 45-year-old body can look.  The only comment I’ve heard about it so far has been (from two different women) “Hey, those are my breasts!”  I like it.

If someone wants to complain about this shape, she’ll have to deal with the plump round ass that spawned it (and that once pulled a fire truck across a parking lot) pushing her out the door of my studio.  Or maybe, if I’m feeling more generous, I’ll offer to cover her in plaster and help her tell the truth about her own body and what goes on inside it.