Steam the wallpaper off. Scrape up all the paste. Let’s not have new wallpaper unless it can have elephants on it. No elephants at the wallpaper store? Okay, then. Paint. What color? That’s too many questions. Let’s just paint it white and leave a bunch of crayons in the room and see what happens.

I once had a party in a building that was about to be gutted. There was spray paint, but nobody used it. It was a little disappointing. We did have fun pushing sofas out the windows into the parking lot, though.

How disgusting would those sofas be if I could smell them now? There was a whole section of the building that smelled like cat pee and unwashed hair. Even years later, after the renovations, you could still smell it sometimes on warm sunny days. The sofas were probably exactly as disgusting as I remember. They needed to go, along with their memories of fighting and fucking (both human and feline) and hangovers and hot dogs and Chinese take-out and Coca Cola.

Goodbye to all of that.

Later, a Chinese restaurant would turn out to be one of my best tenants. The owners kept their space clean, and they always paid their rent on time. If they had spoken more English, maybe they would have complained more. But maybe not: the building behaved well for them while they were there.

The other restaurants in that space had been plagued with constant plumbing and HVAC problems. It would start in the restaurant, and the restaurant’s owners would complain loudly. But even if they hadn’t, I would have heard about it: the trouble inevitably trickled down to the basement. One day Elisabeth came in and her studio was full of steam. Eventually we stopped replacing the ceiling tiles.

Now when I am stuck in a waiting room with a suspended ceiling, I can entertain myself by thinking about what’s on the other side of the tiles. I listen to the rattles, the hums, the whooshes of air. Is that a filter overdue for changing? A failing condensate pump?

Better bring an umbrella next time.

It is vegetable roasting season, and steam pours out of the the vent in the oven, condensing on the small overhang and making a pool on the back burner of the stove. I learned to love vegetables late. I was not quite forty, and my doctor wrung her hands at me over my blood pressure. I found that I was actually not so keen on dying before I turned fifty. So I investigated vegetables. My mother didn’t like beets. We never ate them. She liked eggplant. I still have not developed a taste for that. I love beets, though. And squash, now that I know you don’t have to serve orange vegetables with brown sugar on top.

It turns out I am more of a garlic and olive oil kind of person, which shouldn’t be much of a surprise. I am twenty-five percent filthy lazy peasant from the most wretched part of Italy. Two of my great-grandparents came from Naples a hundred years ago, fleeing poverty and political corruption and organized crime and probably cholera.

Did they arrive at Ellis Island on a steam ship? I bet they did. 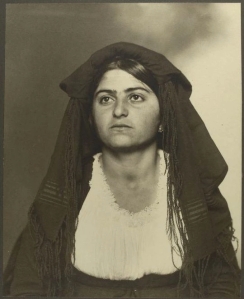 (This lady is not my great-grandmother, but she came to New York from Italy around the same time.)

I know very little about that side of my family. My father ran away. People who run away usually have a reason. So what made him run away? I don’t have to work too hard to imagine why that might have happened. People who don’t understand their history tend to repeat it.

We are all so full of complicated and not-so-complicated molecules, combining with the oxygen we breathe in. We are rusting. We are on fire. We are boiling like unwatched pots. How is it that we don’t have steam coming out of our ears?

Steam rises from the hot water miraculously pouring down from the shower head. What would my great-grandparents think of that? Are these great-grandma’s breasts I’ve got? They certainly are not my mother’s. Standing in the shower, I wash the loneliness and shame of generations from my heart and my cleavage.

This site uses Akismet to reduce spam. Learn how your comment data is processed.